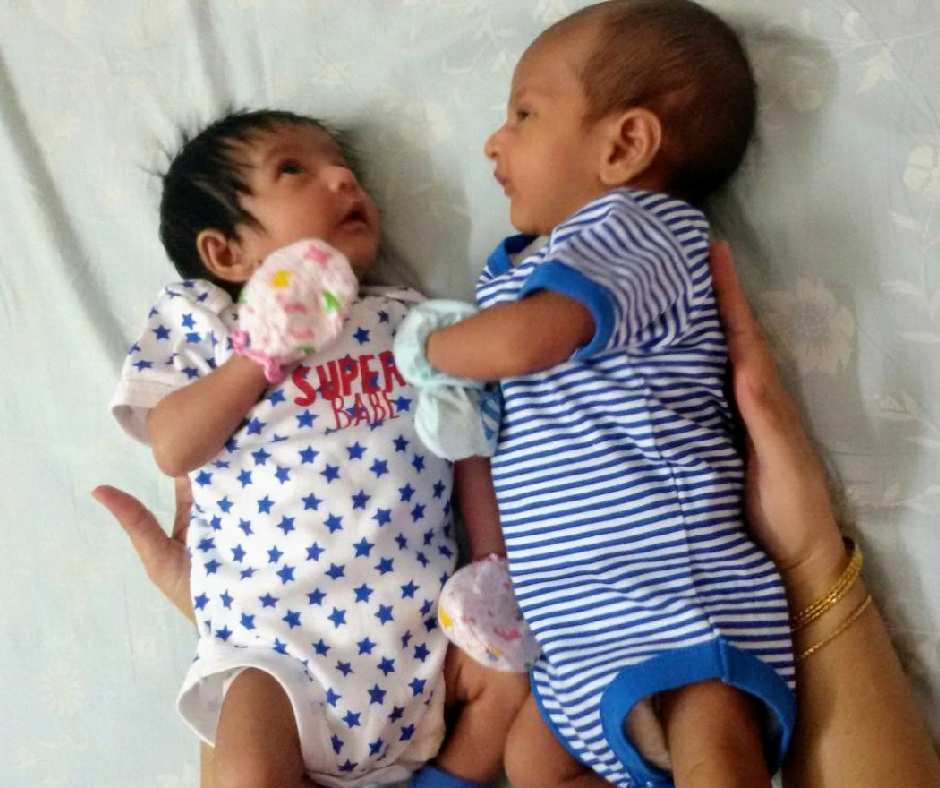 Having twins can be double the fun and double the challenges. Charting out a routine and sticking to a schedule with twins can help you in multiple ways.

When I realised I was expecting twins, I started reading a lot on twin parenting. One common tip/suggestion which I read in every book/article and heard from a lot of moms was to follow a schedule for twins.

There are a lot of benefits of putting twins on a schedule. The main one being that your day gets a bit organized and you can plan it better.  Along with that you can catch on some sleep or munch on some ‘me time’ which is a must for every mom. Even for kids, it’s easier to adjust to a routine. Their day becomes predictable and they are more content and less fussy. Also if both the twins nap at the same time, they are likely to sleep better as one no one kid is awake to disturb the other.

The first two months with my twins all I found myself doing was feeding, burping, changing diapers and putting my kids to sleep. It was like an ongoing cycle with one kid after the other, not leaving scope for any other activity. At the end of the two months I found myself completely exhausted. I was not only sleep deprived but also low on stamina and energy. It was then that I started working on a baby schedule with A&A. They had different feeding habits. One would cluster feed and would want shorter feeds every few hours, the other would feed once in three hours but each session would last long uptill forty five mins. They also had different sleeping habits. One would sleep while feeding and other needed to be rocked or swaddled. So getting the two on the same schedule wasn’t easy. However I did try a few things, and made a few changes in my routine to make it work. Sharing about them below.

Post three months, when I got a hang of breastfeeding twins I would try to feed both the kids together whenever possible. I used to try football hold and tandem feed. And when that wouldn’t work I would bottle feed one and breastfeed the other. Thanks to breastpumps, I could think of expressing breatsmilk and use it in such situations.

When one baby would nap, I would make the other one sleep too. It took some time but eventually they fell into the habit of sleeping together. Since my son used to fall asleep while feeding, I used to put him to sleep first. And then would swaddle my daughter. There used to be around fifteen minutes difference before they could sleep together. And I used to try not to prolong that time gap. This has worked for us since they were around 4 months old and even today at the age of 3 years both the kids go to bed together and even nap at the same time.

Waking Up The Sleeping Baby

As weird or crazy it may sound but this works. If one baby wakes up, wake the other one too, I used to especially follow this for night time feed. That’s because I wanted to feed them together and put them to sleep together. That ways I could catch a few hours of sleep too in between.

Night Time routines are important, especially in case for twins. Because if one child isn’t ready for bed, he/she may keep the other one up too. And then it’s a double challenge to pacify two cranky babies and put them to sleep. Having a night time routine can thus make it all easier. Our night time routine is the same since the start and includes multiple activities that in a way prepare kids for a peaceful bedtime.

As important it is to follow a routine, it’s equally imp to be consistent with it. Be it weekends, vacation or phases of illness, we try the max to stick to our routine and not divert much. Because once the routine goes off track, we need to start from the scratch and then it becomes super challenging to get two babies back in sync again.

This post is a part of#BlogchatterA2Z Challenge on the alphabet ‘G’. You can find all 26 posts on ‘A to Z of Twin Parenting’ under the hashtags #atozoftwinparenting and #themomsagaswrites on Facebook and Twitter

Is It Possible To Gently Discipline A Child?